The following table shows the overall ART success rates in BetaPlus Center in 2014. 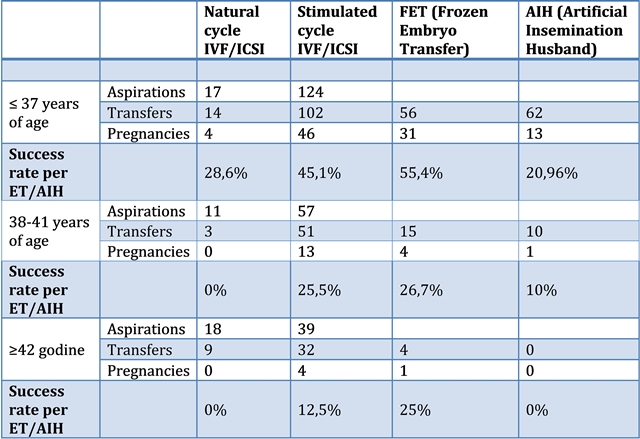 The youngest patient to become pregnant in the stimulated cycle was 25 and the oldest was 45. There were 5 twin pregnancies, two in a fresh cycle (one miscarried) and three in FET. One patient had ectopic pregnancy. No patients were hospitalized for ovarian hyperstimulation syndrome.

In 49 patients (out of a total of 266 aspirations) embryo transfer was not performed due to following reasons:

– no eggs were retrieved during follicle aspiration in 17 patients (6.4%),

– one patient had two embryos cryopreserved from two consecutive natural cycles to be used after cancer treatment,

– “freeze all embryos” strategy was employed in 9 patients, mostly due to danger of developing an ovarian hyperstimulation syndrome,

– 2 patients had the transfer postponed due to different reasons

In AIH procedures the average age of women achieving pregnancy was 32 and of those who did not 34.7.

In FET procedures the average age of women achieving pregnancy was 33.6 and of those who did not 35.9.