IVF and ICSI (In vitro fertilization/intracytoplasmic sperm injection) are sophisticated methods of assisted reproduction. When a couple cannot conceive over a longer period of time, the woman’s eggs will be fertilized using the male partner’s semen in a laboratory. The so fertilized eggs, or embryos, will be transferred after a few days in a procedure called embryo transfer.

In an IVF procedure, a woman’s eggs will only be inseminated with the semen, which allows the best sperms to choose the eggs they will fertilize. In an ICSI procedure, which is performed when severe male infertility factor is present, or in previously unsuccessful IVF cycles, embryologist will select a morphologically best sperm and inject it into the egg.

There are conditions that need to be met before proceeding with the IVF. The following are the indications for an IVF procedure:

IVF and ICSI can be carried out in both natural and stimulated cycles. A woman’s physical and psychological stress levels are lowest in a natural cycle, however, success rates in natural cycle is below 15% per transfer. In addition, the egg in a natural cycle may not be aspirated or fertilization may not occur.

The goal of ovarian stimulation is to acquire a certain number of eggs which can be fertilized. High number of eggs retrieved in ovarian stimulation significantly increases the success rates, up to 50-60% per transfer, depending on infertility causes. In stimulated cycle, when the follicles mature (usually when they are 17-18 mm in size), the patient receives HCG injection to assist them to fully mature (the so-called “trigger”) and the planned follicle aspiration happens 36 hours later. In case of multiple follicles, a short general anesthesia during aspiration may be recommended.

If extra eggs are retrieved, a couple may opt for cryopreservation of extra eggs for the next procedure. Following aspiration and based on semen quality an embryologist will decide whether the IVF or ICSI will be performed. ICSI is recommended in severe male infertility, or in previous unsuccessful fertilizations, among other reasons.

Fertilization method is chosen even before the aspiration in most couples, but there is also a possibility, based on recent test results (semen, number and quality of eggs, etc.), for a different method to be advised. If IVF is a procedure of choice, eggs are inseminated by adding a preselected sperm into a medium containing the egg. Then the mixture is incubated in strictly controlled laboratory conditions. Each egg is examined the following day when fertilization is assessed.

In the ICSI procedure, eggs are stripped of granulosa cells surrounding them. One egg is placed into a laboratory dish and held using a holding pipette. Injection pipette is used to isolate a single sperm which is then injected into the egg. After 16-20 hours the fertilization is assessed, and, later on, the development of embryo.

Within the following 24 hours the number of fertilized eggs will be known. The day of embryo transfer, which is usually performed 3-5 days after aspiration, is then decided on. If there are several fertilized eggs, the transfer is usually done on day 5 after aspiration, when the embryos are in the blastocyst stage and chances of conceiving are the greatest. The surplus embryos can also be cryopreserved.

Embryo transfer is usually entirely painless. Once completed, a progestin therapy (the so-called luteal phase support) is recommended, as it represents the basic precondition for pregnancy. in IVF cycles There is no need to rest after the embryo transfer, as it does not improve the success rates. A pregnancy test can be done 11 days after day 3 embryo transfer, or 9 days after day 5 embryo transfer. If the testing is done with the first morning urine, the test will be positive if the procedure was successful. 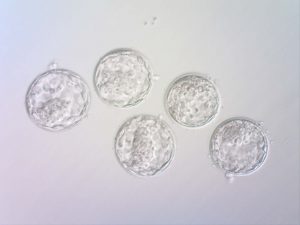 Blastocysts from an IVF/ICSI procedure