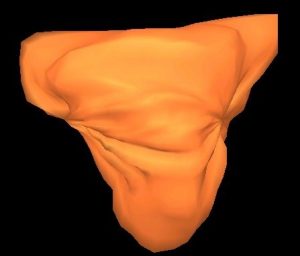 Ultrasound examination, even though quite frequently used nowadays, is not at all simple. Ultrasound of two organs, uterus and ovaries, can sometimes be rather complex and difficult to interpret. The reason is that uterus, its lining and ovaries significantly change their morphology and characteristics depending on the following:

2. Phase of the cycle

For higher resolution ultrasound only a probe with frequency of 7-10mHz is used in gynecology. In a longitudinal section you can see a top (fundus) of uterus, a body and a cervix. Longitudinal section goes along the midaxis, i.e. through mucosa, whereas the cross section can be set anywhere across the uterus. Several short films of uterus and ovaries can be seen on our YouTube page.

Endometrium is thin during the menstruation. That simplifies diagnosing intrauterine pathology – polyps, myomas and synechiae. Therefore most gynecologists prefer ultrasound examination during or immediately after the period. Later in the cycle, all the way to ovulation phase, endometrium thickens. 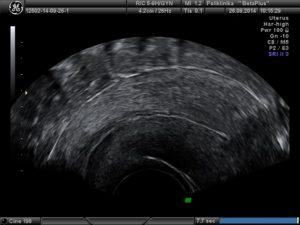 Ovulation is characterized by a so-called triple-line endometrial pattern. This comes from creation of so-called luteinized cells along the thickened endometrium, which is a result of progesterone production in ovulating follicle. At a later stage, when luteinized cells fill the whole endometrium, endometrium becomes hyperechoic throughout. This finding is characteristic for late secretory, or luteal phase, and represents a fairly accurate indirect proof of a quality ovulation.

Polyps are common pathology during generative age. They are rarely found on ultrasound by chance; a woman usually has characteristic symptoms – sudden irregular, prolonged and heavy bleeding or inability to conceive. They are easiest and best seen during menstruation as they are clearly marked by hypoechoic blood.

Uterine septum is a congenital uterine malformation. The size can vary from a minimal, when referred to as uterus arcuatus and uterus subseptus, to malformation when uterine cavity is partitioned by a longitudinal septum going all the way to the cervix. It is well known that smaller septum cause significant problems during pregnancy. A conventional ultrasound can arise suspicion of uterine septum, but definite diagnosis can only be established by means of a 3D ultrasound, HSG or hysteroscopy.

During fertile period normal ovary is situated freely in the pelvis, with stroma and follicles clearly visible. In each stage of the cycle both ovaries host several follicles sized up to 10mm. These are so-called antral follicles which go into atresia in the cycle if not chosen to be a leading follicle in that cycle.

In the late proliferative phase a leading follicle is developed. From the moment it was chosen as the leading follicle, which can be seen by ultrasound when it reaches the size of about 10mm, to the ovulation it grows at the rate of 2-3mm a day. Ovulation occurs when such follicle reaches 22-28mm.

Every ovulation leads to certain amount of bleeding in the wall of ruptured follicle The ruptured follicle becomes corpus rubrum that, three days later transforms into corpus luteum Corpus luteum sustains the other half of the cycle in terms of hormones thus preparing the environment for a potential pregnancy. In order to be successful it requires a particularly supple blood supply.

Cysts quite frequently develop in ovaries. Typical are functional ovarian cysts that can be follicular or luteal, with smooth walls and clear, hypoechoic liquid content. They can reach even 10cm in size. In over 90% of cases they will spontaneously resolve after a 2-4 month period; therefore it is a mistake to immediately refer such a patient to a surgery. Monitoring is all that is required.

What can be misinterpreted as a functional cyst is the fluid in the Fallopian tube. Sactosalpinx or hydrosalpinx is a term for altered Fallopian tube which is usually twisted around its axis so cysts are visible in the transverse section through the structure. The only way we can be certain we see the tubes is to notice an ovary next to a cystic formation, which is not always easy.

There are also cysts that have no smooth walls or clear liquid contents, such as bleeding corpus rubrum or CRH (corpus rubrum hemorrhagicum). Inside the cyst there is a content which is actually characteristic for fresh intraovarian bleeding. Of course when a woman comes with typical clinical features of sudden pains arising at the time of ovulation and typical ultrasound finding, it is easy to determine diagnosis. In about 10% of cases CRH requires a surgical procedure – if the bleeding will not cease (i.e. if CRH increases) or if corpus rubrum bleeds into abdomen (can be identified by loose liquid in the abdomen), or if the pain is extensive. If no surgery is necessary, CRH will spontaneously perish.

Endometriosis is another frequent, but unfortunately a serious condition in gynecology. It consists of cysts with thick walls and so called chocolate content, which is essentially old blood. There is a flow through cysts walls and it is usually of low resistance index (RI) – it can go as low as 0.40. As endometriosis is accompanied by elevated tumor marker of coelomic epithelium, CA 125, it is easily confused for malignant conditions.

Ultrasound can also determine ovarian reserve (AFC – antral follicle count) which is very important when determining the chances for pregnancy in infertile woman.