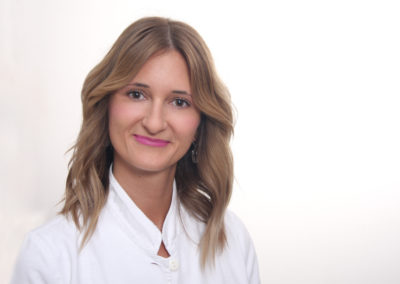 Dr. Sandra Novak graduated from University of Zagreb School of Medicine in 2008 with excellence and in 2007/2008 academic year she was awarded the Dean’s Prize as the best student of the final year of studies at the School.

She has co-authored a scientific article titled Development and Validation of Questionnaire Measuring Attitudes Towards Sexual Health Among University Students in the Croatian Medical Journal during her studies showing her specific interest in gynecology and obstetrics.

She completed residency in gynecology and obstetrics at Petrova Hospital in 2016. During the time of her residency she has invested additional efforts in becoming educated in ultrasound diagnostics as well as completing a specialized postgraduate course of Ultrasound in Gynecology and Obstetrics at “Sveti Duh” Clinical Hospital.

In Opatija and Poreč she has successfully completed the Practical Use of 3D Ultrasound in Gynecology and Obstetrics Course organized by the International Academy of Medical Ultrasound (IAMU).

The focus of Dr. Novak’s interests is in ultrasound diagnostics (2D/3D/4D and color Doppler) and gynecological endocrinology. She regularly continues with her education and attends congresses, lectures and courses in gynecology and obstetrics. Since 2010 she has been employed with Zagreb Center Healthcare Center and she has headed a team in the Gynecology Clinic there since 2016. Dr. Novak does part-time work in BetaPlus Center.

Nurses, technicians, and others