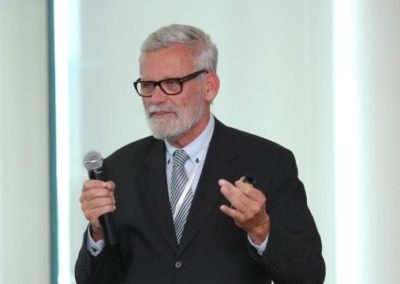 Professor Dr. Veljko Vlaisavljević founded the IVF laboratory in Maribor in 1983, and was the head of the Department of Reproductive Medicine in the University Hospital in Maribor. His current work is at the IVF Adria Consulting in Maribor.

Along with his clinical work and scientific research, he has educated numerous gynecologists and embryologists from the region and helped establish and run a few of our IVF centers. He initiated the founding of the first patients’ association in the region (1988) and was the ambassador of ESHRE when the first European Patients’ Association “Fertility Europe” was founded in 2010.

Veljko Vlaisavljević is one of the few gynecologists who has dedicated his entire professional career to treating infertility and IVF since 1983.  He received his PhD in the field of male infertility (andrology) in Zagreb. In 1995, together with a long term associate, Prof. Borut Kovačič, an embryologist, he has helped a couple to conceive and bear a healthy child, using the methods of ICSI/TESA, as an 11th team in the world. Many years of experience and the joint collaboration of Prof. Vlaisavljević and Prof. Kovačič in the field of in vitro fertilization has resulted in more than 9000 babies being born conceived using IVF and ICSI methods.

Prof. Vlaisavljević has published his work in more than 500 papers in scientific literature. Apart from national and regional ones, his professional activities include membership in the European Society for Human Reproduction and Embryology (ESHRE), where he was a member of the executive board and working bodies for quality control of IVF centers, accreditation of European IVF centers, preparation of European guidelines for infertility treatment and education for gynecologists and embryologists.

Nurses, technicians, and others